How I Started Wet Shaving

My first memories of shaving are with my grandpa.  I’d stand on the toilet, and watch him shave.  It was the 80’s, and all the commercials I saw on TV were for foam from a can that looked kind of like a barber poll.  That’s not how grandpa did it though.  He had an old spice mug with a chunk of soap in the bottom.  He used a red and white shaving brush to whip up what I now know to be a way too soupy lather.  I asked him why he didn’t use the foam, and he said foam was for amateurs. He’d always let me use up his extra lather, and I’d scrape it off my face with a safety razor that didn’t have a blade.  I can even remember burning my face off with the Old Spice aftershave a few times. 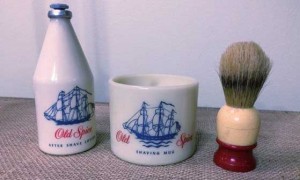 Fast forward about 20 years, and in 2004, and I inherited Grandpa’s shaving kit.  He’d given up the safety razor, but he still used the brush and mug I remembered.  He even had about 20 pucks of Williams Shave Soap – I guess he figured they might stop making the stuff and he didn’t want to have to worry about it.

A few years later, I was saving up to buy my first house, and I ran across an article that said you could save money shaving with a Safety Razor.  Grandpa’s gear had been sitting on my shelf for awhile now, but I hadn’t started using it.  I was still using the expensive cartridges and fancy gel that came from a can.

Grandpa had taught me to shave with his safety razor, but that was way too much work for a 16 year old who had places to see and girls to meet.  Now though, I was a bit more refined.  I decided to give it a try.

I didn’t want to use his brush, so I went out to the mall and paid WAY too much money for a badger brush at a fancy store that tried to sell me $500 worth of shaving gear.  I only bought the brush.  Grandpa didn’t need all that other junk, neither did I.

That’s how I started wet shaving.

How It Turned Into A Business

After a few months, I was saving tons of money on cartridge razors, enjoying my morning shave, and I was telling everyone all about it.

Good condition safety razors seemed to be pretty hard to come by at the flea markets and estate sales, so in 2014 I opened a business selling wet shaving products.

We released our first shaving set for Christmas 2014, with the goal of making shaving a luxury, but affordable.